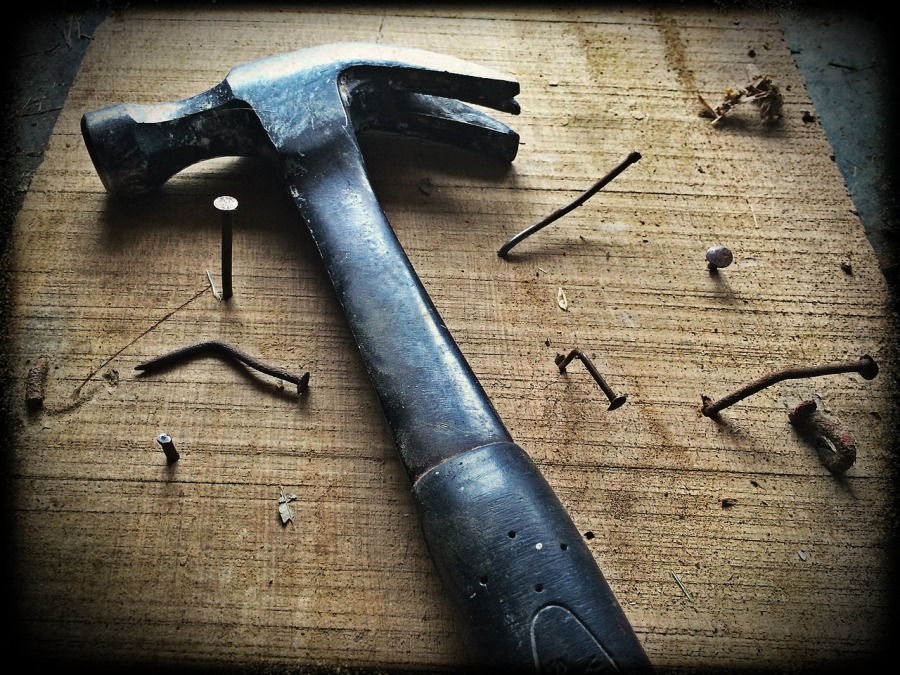 Scott is my builder, and doer of all things that require tools and a bit of practical nous – something distinctly lacking in my own toolkit. I don’t consider myself entirely useless with a screwdriver and hammer, and I have even been gifted a sledgehammer by my sister¹, but the truth is I’m tool-challenged for the most part. However, having said that, there were times when I reckon I could have wielded an axe very efficiently indeed, during my pre-menstrual days. Yeah, a pretty big fail at the “sugar and spice and all things nice” that women were (and still are?) supposed to be. Some women are completely unaffected and some get weepy during their pre-menstrual time, but I turned into a  potential axe murderer. I don’t know if some of my boyfriends and partners knew how close a call it was for them at times when they wouldn’t do as they were told. Of course, if they objected to me not doing as I was told, they were just being unreasonable. Life with pre-menstrual syndrome could get ‘exciting’, sometimes.

I digress – and don’t ask me how a paragraph that begins with Scott the builder finishes with a description of me and my pre-menstrual psychopathic syndrome. Proficiency with tools and axes featured there somewhere. To continue – Scott has a business partner, Liam, and together they are a building duo who turn their hands to many things – even hanging my new blinds and curtains (although I noted that they didn’t pleat them, but then builders’ hands and pleating curtains are probably not a match made in heaven) – but Scott’s my main man. He started doing small bits and pieces for me when I first moved into my current flat about five years ago, and progressed to big bits and pieces. Because I bought an older flat, there have always been – and sometimes it seems there always will be – bits and pieces to attend to. Although I’m glad that I’ve got Scott to rely on to do a good job, there are times when I think a brand new boring-arse place will be just the ticket one day. I’ll revel in the total nothing-to-do-here newness of it all.  At least, I think I will.

Scott just lives around the road from me, which is pretty handy. Especially as he has also said to ring him at any time if I need him to come around and smack a head or two. Actually, he didn’t use those words, but somehow that’s the vision I have of how he’d sort out any undesirables sneaking around my property at night. He feels sorry for me, because I’m not just a woman on my own, I’m a useless woman on my own – and I can’t begin to express how much I appreciate his goodwill, nor how much it equally galls me to be that woman. From time to time I try and take a little bit of charge and make decisions about the repairs and renovations he and Liam do for me, so as not appear entirely pathetic, even though it hurts my head making decisions for things I know next to nothing about. Surprisingly, those decisions don’t always go well – I know, hard to believe. But I’ve become quite used to the taste of humble pie now.

Recently, Scott and Liam have been renovating my investment flat, which is the front one of three on the same property as the flat I currently live in. After about a million changes of plans, I will be moving into the front flat soon, and selling the one I’m living in now at the back of the property to my nephew. Similar to his auntie, it’s my nephew’s brain that earns him money, and not his practical abilities. Scott and Liam will not be short of work.

Right now they’re landscaping the lawn and garden at the front flat – landscaping being another of their talents in their toolkit. I feel a bit weird about it, because a manicured garden is foreign to me. I do weeds, overgrown bushes, disorder, and dandelions in the lawn. Although I do religiously keep the lawns mowed and the path edges trimmed. Go figure.

Inside the house is the opposite of the garden – there I tend towards tidiness and order. I’m not sure how I’ll handle such order both inside and outside the house, but I suspect that it may end up appealing to the really anal side of me, and I won’t ever be able to ever leave home and go out into the messy world. To this end, I am stubbornly keeping a tucked away corner of the garden manicure-free. My excuse is that I may one day have a garden shed built there, so no point fancying it up just to destroy it later. The others – Scott, Liam and Sis – call it my weed patch 🙂

I imagine that as long as Scott and I live in Christchurch he will do work for me, and we’ll still talk and argue about what does and doesn’t need doing like we’ve always done. Sometimes I think ahead twenty years and wonder if he will still be hammering and banging around my place. He’d be a man in his mid-fifties by then, and I’d be …… well no need to put a number on that. Unless I get that brand new boring-arse place, of course. But then, there’d be no Scott, and I’ve kind of got used to him and Liam being around. Tough decision.

¹Whereby I am Gifted a Sledgehammer – A B’Old Woman

5 thoughts on “Scott the builder”