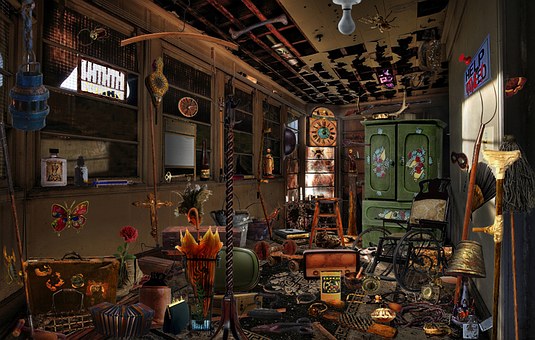 I don’t know how I got so much stuff.  For someone who considers herself not to be a collector or hoarder, I don’t know how I ended up with so much!  I am gradually shedding much of it out of necessity, because I am now living in a smaller home with a pleasingly dismal amount of storage space, and it has made me ruthless about what I keep.  The shock of discovering just how much I accumulated over the years has made me vow to never live in a bigger place again.  You see, I have realised that there’s a Universal law of acquisition – the more space we have, the more we acquire to fill it.  I’m sure marketers know this, and are in conspiracy with house builders, and together they have formed an unholy alliance.  The builders build bigger houses, and the marketers seduce us into buying stuff to fill it.  The builders claim it’s just what people want now, and they’re right in a “what came first – the chicken or the egg?” kind of way, because we do need bigger houses for all our stuff.

A true hoarder doesn’t need a big place, of course, to fit all their stuff into.  They just fill whatever space they have, and make tunnels through it.  I must confess to being fascinated with the odd glimpse I get of this, although I can’t actually bring myself to watch whole TV programmes about it.  For someone who’s not a hoarder (honestly, that is my default setting), and is perhaps just a tinytiny bit anal about having things tidy, I‘m just not mentally strong enough to watch those programmes.  I can roar with laughter over clips of wedding catastrophes, but can’t watch a hoarding reality TV programme.  Go figure.  My sister reckons that having clutter and stuff everywhere is like a loud noise to me, and I think she’s onto something with that.

When I left Auckland in 2010, I was only leaving for a ‘gap’ year, so put all my household items into storage, and temporarily rented out my place.   I owned a two-bedroom stand-alone unit at the time, which wasn’t big, but I still managed to get what I considered an eye-watering amount of stuff into it.  That’s how it felt when I was packing it up, anyway.  Now, where’s the fun of making a plan if it doesn’t turn to custard five minutes after putting it into action?  One year turned into many years, and eventually I came to the realisation that I wasn’t returning to Auckland, so I sold up, and got the things I had in storage shipped to Christchurch.  And nearly died when I saw what got unloaded from the truck!  There was no way it was going to fit into the smaller flat I’d bought, along with the bits and pieces I had bought in the interim.  Luckily, I’d had the forethought to rent a small storage unit beforehand, and it got squeezed into that.  When I say ‘squeezed’, that’s exactly what I mean.  Two years later, after irregular and reluctant forays into its nether regions, and many donations to Dogwatch, I have nearly emptied it, and will soon be able to hand back the key.  I never want to go through that again, and have vowed that a smaller home, where fewer belongings are an absolute must, is how I will always live from now on.

Some members of my family are completely different to me.  They love either beautiful or useful things, and don’t tire of acquiring more of them.  One of my sisters and her husband has a garage that’s about the same size as my flat, and he lives in big-boy-toy-and-tool heaven.  I have visited people’s houses which are crammed with beautiful and interesting things, and whilst I admire their eye for the unique and lovely, I can never quite shut the voice up inside my head that wants to know who dusts all this stuff?  I haven’t yet found the courage to expose my pedantry and ask this, partly because I don’t want to rain on their parades, but because I also suspect that dusting doesn’t figure very highly on their to-do lists.

So why do we accumulate so much stuff?  Even those of us who swear we don’t?  It’s so bad, that a minimalist movement has sprung up, whereby the adherents consciously choose NOT to have stuff.  Imagine a hundred years ago telling the average person that one day having more stuff than we knew what to do with would be a problem.  Even sixty years ago, when I came into this world, my parents didn’t have to clear out a room for me to sleep in.  They just didn’t have that much stuff.  Now, we get seduced into spending by clever marketing techniques, which sell us happiness through buying, buying, buying.  Marketers know how to get inside our heads, and unless we make a conscious effort to be aware, they’ve got us and we don’t even know it.  I’m secretly in awe of this deviousness tied up in such seemingly simple and innocent, but deadly, packaging.

I will never be smarter than a marketer.  They can run rings around me any day of the week with their mind games.  My only defence is to determinedly have a home that is too small to have much stuff.  It is the best strategy I know of to save myself from evil marketing geniuses.  Sometimes, I am made aware in subtle ways that my ‘status’ is reduced by having a smaller home.  But, at the end of the day, I’m sixty – and basically don’t give too many farks.  I don’t have room for them.

Exploring best practice and research in sexual violence. A loud voice in the fight against victim blaming. Written and Managed by Psychologist and Best Selling Author Dr Jessica Taylor