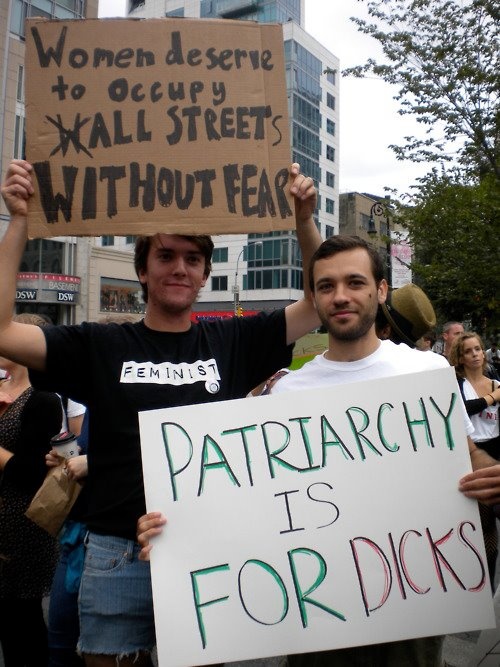 The evening was warm, and the air was still.  The women arrived in pairs or alone at the pre-arranged meeting place.  Some chatted, others were silent, not knowing what the evening would bring.  I was amongst the latter.  This was my first time at such a gathering.  We took our seats, and looked to the leader of the group to begin what we had all came for.  She welcomed us, and then outlined the plan we were waiting to hear.  And so the discussion commenced in earnest about how we were going to implement this plan and take over the world.

Or, at least how to claim our equal place in it.

Feminism: belief/advocacy for the social, economic, and political equality of the sexes.  Nothing scary about that, is there?  So why is there such a battle for it?

For a long time, I was a closet feminist.  Some who know me might say that there was nothing very closeted about it, but I felt that I never truly owned it.  For various reasons, including being afraid of not getting a boyfriend, I didn’t have the moral courage to do that.  Then I got old, and it all changed.  I didn’t care about any of the things I was once afraid of.  It became more important for me to stand in my truth, than have a boyfriend.  What a bloody relief that was.  Being sixty can rock!

I discovered a small feminist discussion group that allowed me to speak of things I could only talk about in whispers beforehand.  Contrary to popular belief, the group didn’t indulge in ‘man-hating’ sessions – turns out that that’s not very interesting.  Our discussions were wide-ranging, and for me incredibly mind-expanding, without the drugs.  Then I began attending a different series of talks about feminism (Ōtautahi Kōrerotia https://www.facebook.com/okcommunityarts/), and was surprised to see some men attending them too.  I knew that some men apparently did support feminism, but that wasn’t evident in my world to date.  Which is not to say I didn’t know some nice men, but actively supporting feminism was a step too far into the unknown and uncomfortable, and too socially daunting for them.

Although the number of people attending wasn’t large – around twenty five people – it was totally inclusive, and within that small number was a huge variety of ages, identities, and genders.  And that night, I really got it how we all want to matter.  All. Of. Us.  Most events I attended, whether social or otherwise, were also attended by people fairly similar to myself.  It’s not intentional, it’s just the way I subconsciously work it, like most of us.  This room, however, was a jolt to my senses with its macrocosm within a microcosm atmosphere.  It was exhilarating, and challenging.  In a matter of months, my world and awareness had been opened up in a way I hadn’t encountered since youth.  Sure, the honeymoon period will wane, and disenchantment may set in with some aspects, but that’s okay, everything evolves, and the bonus of my age makes me more able to ride those waves.

One of the interesting considerations to emerge from the first of this series of talks, was where do men go who want to reject patriarchal ideology?  It seems that the only place they have is feminist groups.  There are a number of men’s groups around which purport to advocate and support men, however, they don’t appear to reject patriarchal ideology.  These men who attend feminist groups still want to be men, but not in the way that is currently taught to them.  Like us, they don’t want to live in a system that is based on ‘power over’, they don’t want to be a part of dehumanising those perceived by that system as being weaker or marginalised, nor endorse a system that negatively affects a person’s life chances and opportunities because of their gender or marginality.  Perhaps the only safe group a man can be in if he wants to reject these things, is a feminist group.  This might be the only place he can learn how to do things differently, without the danger of a group run by men reverting to patriarchal ideology.  I don’t know the answers to these ponderings, but each day I open myself up to feminism, the more I learn.

3 thoughts on “What About Men Who Are Feminists?”