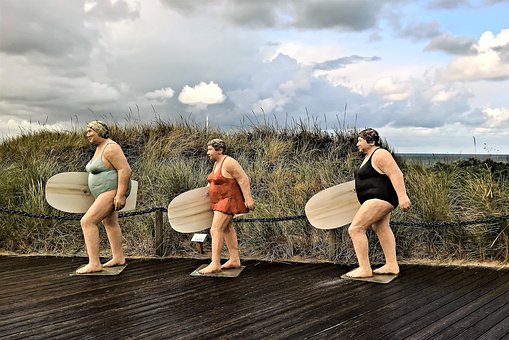 Sis was slapping some gunk on her face which she’d been gifted by a friend – the gunk, that is, not the face. She was staying with me for the week, and we were in my bathroom doing morning getting-ready things. “Supposed to fight the seven sins of ageing” she said to me, reading the lies on the label out loud. She looked at the label again, “Oh, that’s the seven signs, not sins”. We guffawed, both at the error and at the marketing malarkey, shamelessly displaying old mercury fillings from our no pain-relief “murder house” youthful dentistry days. We’ve both been in this world for a while now, and we know that the seven sins of ageing can’t be fixed by gunk in a jar.

These days, we’re pretty chill with all the ills and thrills of ageing. There’s absolutely no point not being, because we’ve tried spitting in one hand and wishing in the other, and we know which one fills up first. Besides, we genuinely enjoy some of the things that ageing has brought to us. There’s a certain amount of freedom and release from angst that comes with it, and we do love that.

But there’s no denying that ageing is a sin in our youth-centric society, and I’m sure that the list of sins associated with ageing is longer than a measly seven.  As a younger woman, I can’t pretend that I was nice about older people, and now as an older woman I can be a bad ol’ bitch at winding up the younglings who have replaced me, because I know what buttons to push. I know – I’m awful. That release from angst I mentioned comes with a slowly disintegrating caring-about-what-others-think filter. Although I reckon I can be mighty good, kind and generous at times, I just don’t feel the need to be a good girl all the time. Judgement for that washes right off this ol’ duck’s back now. And that’s the first sin of aging.

There’s plenty more, and a discussion around that would prove to be a very long one, I suspect. However, I’ve limited myself to seven as I see them. There’ll be those who vehemently disagree with me, and those who think the sin list is fairly mild. I may revise it as I travel further through life, but for now –

Try finding a fix in a jar for that lot.

I don’t know at what point we become old to ourselves, although we’re old to anyone at least ten years younger. I tend to think of myself as ’older’, not old, although, judging by the looks from my grand-nieces and nephew when I tell them my age, they would disagree. Neither Sis nor I hide our age from them, as we each decided a while ago at different times that we weren’t going to be ashamed of the word ‘older’, nor try and pretend we weren’t who we were. We’ve come too far not to wear it with self-respect, or enjoy the unique freedoms it brings. Not everyone sees it like I do, but I also realised a while ago that the saying “the truth sets us free” worked for me. It can be brutal, but finishing with pretence is liberating.

If I have any words of advice for the process of ageing, it’s do whatever you want because it’s your life, and why should you listen to me, anyway 🙂

17 thoughts on “The seven sins of ageing”

Follow A B'Old Woman on WordPress.com
Join 116 other followers